The latest Teevens Teleteaser from Dartmouth:

Columbia sports information has a look at Ivy League rushing leader Dante Miller with links to clips of his 41- and 75-yard touchdown runs against Penn HERE. 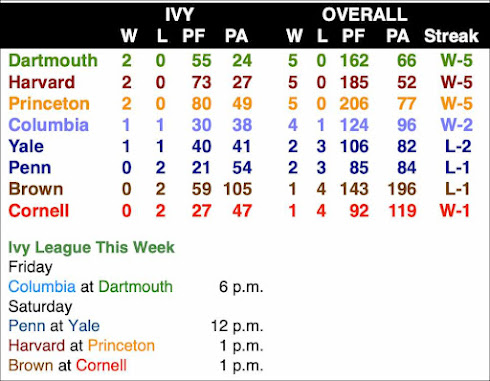 #
Jake Novak at Roar Lions 2021 has posted his weekly power rankings and they look like this:

EXTRA POINT
Given that it is car inspection week for us, I followed Mrs. BGA into town this morning so I could cart her to the bus to Hanover after dropping her car at the garage. This afternoon I will pick her up at the park & ride where the bus leaves her and shuttle her back to pick up her car, which hopefully will have passed inspection. The VW bus goes in tomorrow. Pray for us.

Our new EV does not have to be inspected until next year and fortunately it came with free lifetime inspection at the dealer. That's probably a good thing. I'm imagining a mechanic wandering around the car trying to find the tail pipe to check the exhaust. The car has neither a tail pipe nor exhaust.

Inspection always has me remembering the time I took my grandmother's car for inspection in New Jersey. Back then there was a long, factory-looking building you drove into and made several stops inside. At one you had to flick on the lights and then the high beams. There was a least one more stop. I don't remember what that one was for. Maybe wipers and horn.

The inspector put a red "failed" sticker on the car and I drove out of the facility. I made a right turn, went under some railroad tracks and after passing through a traffic light applied the brakes . . . and . . . nothing . . . happened. Tried it again and the brake pedal clunked on the floor with no resistance at all.

I ended up leaving the car to be towed and walked home. I still shake my head at the memory of the guy saying I needed to get the brakes fixed but then letting me drive the car out of the inspection station without a little more warning.

Check in with BGA Premium tonight to read Dartmouth coach Buddy Teevens' answers to your questions. If there's something you'd like me to ask, there's still time because I won't be meeting with him until after practice today. Email your question this way by CLICKING HERE. That will address an email with the subject line, QuestionsForCoach.
#
Still can't get enough of that big win at New Hampshire? There are several key plays from the game on Dartmouth's Plays of the Week and I've broken them out for you here:
Watch several angles of Paxton Scott's long TD catch-and-run HERE. (By the way, there's an angle you may not have seen that shows he really DID stay inbounds ;-)
Connor Davis' 51-yard field goal can be seen HERE.
John Pupel's interception and the Derek Kyler-to-Joe Kramer TD catch are available HERE.
#
If I'm going to be completely honest, these highlights from the Dartmouth football office made me a little dizzy ;-)
#
Massey Ratings has . . .
Dartmouth over Columbia, 28-14, with 85 percent confidence.
Harvard winning at Princeton, 27-24, with 55 percent confidence.
Yale over Penn, 24-14, with 84 percent confidence.
Cornell over Brown , 30-26, with 60 percent confidence
#
The Analyst has Columbia in a story headlined, Five Surprising FCS Team. From the story (LINK):

Columbia (4-1, 1-1 Ivy)
Coming From: When the Ivy League last played in 2019, the Lions finished 3-7, so they’ve already surpassed that win total. They were picked seventh out of eight teams in the league’s preseason poll.
Key Wins: 22-20 at Central Connecticut State; 23-14 vs. Penn
Key Factor: The Lions have held a halftime lead and not surrendered it in the second half of all four wins, and Dante Miller has averaged 131.5 yards in those games. It also helps to have the No. 3 active winningest coach at all NCAA levels in Al Bagnoli (261-127).
What’s Ahead: Overlooked due to the Ivies having three 5-0 teams for the first time since 1968, the Lions have a difficult stretch of Dartmouth, Yale and Harvard in their next three games.

Green Alert Take: I'm reminded of that old World War I saying, "Smoke 'em if you got 'em." With Columbia's upcoming three-game stretch, this figures to be the perfect time to include the Lions in this kind of story. If they make it clean to the other side they will go from Surprising to Really, Really Surprising.

Former Dartmouth defensive lineman Derham Cato '05 took one for the team as tight ends coach at the University of Washington. From a Yardbarker story (LINK):

The tight-ends coach met with reporters for the first time since he was injured at Oregon State, cut down on the sideline during a punt early in the game and taken away to a local hospital.

Outside of learning that Cato has recovered without surgery or anything getting in the way of his coaching, the biggest revelation from the mishap previously undisclosed was this:

The second year assistant coach got hit by friendly fire — Cato was taken out by a Husky player.

Even the Dartmouth Co-Op is climbing aboard the bandwagon. From an email this morning: 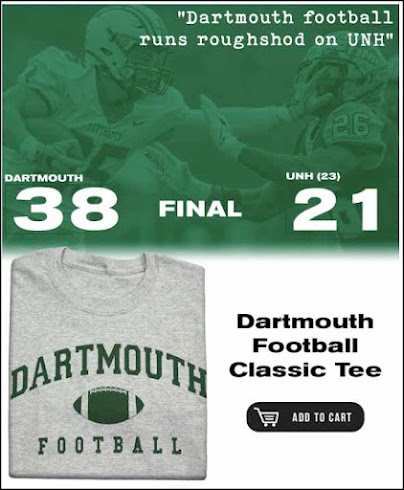 EXTRA POINT
During the summer the sun was up right from the start of my early morning hike. As the days grew shorter earlier this fall I needed a headlamp when it set out until the I reached the peak and could usually turn it off on my way down the back side of the mountain. Because I now need the headlamp for the entire hike I've shifted my daily hike until a little later – and today I'm really glad. It was a brisk 37 degrees this morning when I'd usually set off. Since then the temperature has "soared" to 45 degrees but feels much warmer with a Columbia Carolina blue sky and not a cloud to be seen. Time to pull on the hiking shoes and hit the trail ;-)

As noted yesterday here and on BGA Premium, with the season at the midway point and only Ivy League games remaining this is a good time for the next edition of the always popular Questions For Coach. If you have a question you'd like me to ask Buddy Teevens, email it this way by CLICKING HERE. That will address an email with the subject line, QuestionsForCoach.
The plan is to post the story for subscribers Wednesday night and make it available to others over the weekend.
Only a few readers sent along questions yesterday so I'm hoping to hear from more of you over the next two days.
#
Dartmouth has cracked one national ranking and is on the cusp of making the other:
#
The Big Green was the STATS Perform/The Analyst National Team of the Week. From the story (LINK):

Dartmouth (38-21 win at then-No. 23 New Hampshire)
The Big Green (5-0) beat a nationally ranked opponent for the fourth time since 2016 and posted their first win at UNH since 1969. Derek Kyler completed 18 of 23 passes for a career-high 325 yards as well as two touchdowns, and fellow quarterback Nick Howard rushed for three scores as the offense possessed the ball for nearly 39 minutes and totaled 604 yards.

Something called SportsLogos.net has a lengthy piece on the “Lone Pine” helmet design Dartmouth helmets will be adorned with Friday night. So you know, the design is simply applied to the current helmets, which will then be returned to the Blackman stripe design.(LINK)

In advance of Friday night's game against Columbia here's a look at highlights from the Lions' win over Penn:

Outside of the Ivy League, New Hampshire is a 2-point pick at Elon, Duquesne is favored by 8 at Sacred Heart and Dayton is a 3-point favorite at Valparaiso.

For perspective, Dartmouth was a 2-point favorite at New Hampshire last week and won by 17.

AP columnist Jim Litke has a story with the headline No jab, no job: Ex-coach Rolovich gets pink-slipped at WSU about the Washington State head football coach (and several assistants) being let go for not getting vaccinated. (LINK) Discuss among  yourselves.

EXTRA POINT
I was rooting around for something here in the BGA World Headquarters this morning and came across a strip of Velcro I bought for some forgotten reason and never used. That got me thinking about the first time I remember seeing the stuff.

It was playing flag football in junior high school gym class. It was a long time ago but I remember the first flags we used had big plastic snaps and they didn't work well when they stretched or broke. Then one day Mr. Rikstad or whoever the gym teacher was brought out these cool red and yellow flags that just stuck to new belts automatically and came off with a satisfying rrrip if you were playing defense or just liked making the sound in the huddle.

Two things. First, don't tell anyone but if you wrapped the flags once around the belt after attaching them it made them shorter and really hard to pull off.

And second, did you know where the word Velcro comes from? Wikipedia explains that it is a portmanteau from the French words velours (velvet) and croché (hook). Don't say you never learned anything reading BGA Daily ;-)