All quiet on the Dartmouth front although word is that game times/TV schedule could be released this week. Or next.

If you are hungry for Dartmouth football talk check out the unofficial Ivy League conference forum, started last year when the Voy message board was down. With Voy coming back online the CSJ Ivy board never did catch on, but the forum is still there in case you are interested.

CLICK HERE to read a string about last year's Dartmouth freshmen before they ever put on a uniform. Did the commenters get it right? What would they say about the incoming freshmen this year?

•
I made three trips to a clearing across the road last night but never did see the northern lights. Supposedly we may have another chance tonight. Fingers crossed. 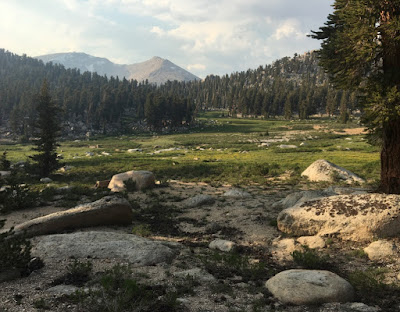 That Certain Dartmouth '14 shot this picture that looks to my eye like an Albert Bierstadt painting during her hike on the 2,650-mile Pacific Crest Trail. Her blog is about a week behind but if we have it figured right, she should be somewhere around the 900-mile mark as we speak. Check out her blog HERE.

•
With a ton of work in the queue and not enough time to do it, I decided I can't afford to give up time in the afternoon for my daily hike out the back door and up to the South Peak of Moose Mountain. That being the case, I hit the trail at 5:30 this morning.

It was pretty dark in the deep woods for the first 20 minutes or so and because That Certain Nittany Lion '16 has seen bears twice in the past week on his way to work and his mom also saw one, I was a bit jumpy in the early going. Griff the Wonder Dog and I had seen a bear on on the same trail last year and the pup had run it off, but this time he wasn't with me. As it turned out, that was a good thing when I saw what I first thought was a bear cub on the trail directly in front of me.

Rather than a bear, it was an enormous porcupine. I saw dollar signs while the porcupine was taking its sweet time heading into the woods because golden retrievers and porcupines don't mix. A year ago the pup got a mouthful of quills and when we couldn't get them all out it meant an expensive trip to the vet.

A second porcupine that spooked me as it noisily scurried up a small pine five feet from me reinforced the notion that Griff was better off sleeping on the couch than joining me on my early morning hike.
Posted by BGA at 8:46 AM