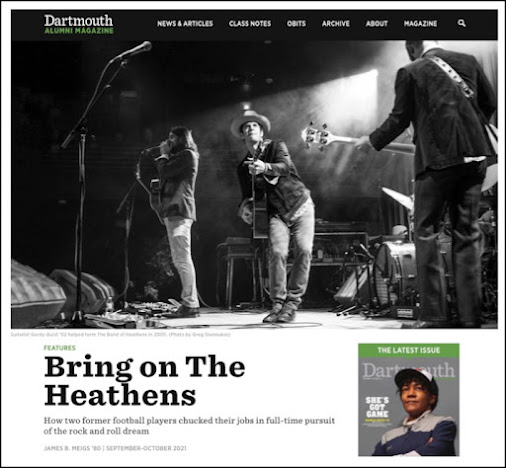 Dartmouth Alumni Magazine has a story about Gordy Quist '02, Trevor Nealon '02 and The Band of Heathens spun out of the Austin-based group's appearance at the Mile 0 Fest in Key West at the end of April. Quist, a former linebacker from Spring, Texas, was listed at 6-foot-2 and 220 pounds while Nealon, a corner from Tacoma, was listed at 6-0, 190 in their senior year media guide. A third teammate and classmate who has made frequent appearances with the band is Damien Roomets, a 6-0, 195 wide receiver from Sudbury, Mass. From the story (LINK):

Rolling Stone calls the Heathens “a smoking live band,” and the group has toured relentlessly for 15 years, playing everywhere from small clubs to huge festivals. Along the way, they’ve built up a particularly intense following. “These cats are why I’m here,” one fan tells me.

If you are a BGA Daily regular you are familiar with the Heathens from past postings but if you are new, here's a particular timely song called Hurricane with Gordy singing lead vocals. Per YouTube the video has been viewed 27,218,109 times as of this morning!

Check out the Heathens performing LA Country Blues on Austin City Limits HERE and I particularly like Gordy's solo performance on Green and Blue. (LINK)
#
NFL teams must be down to 53 active players and 16 practice squad players by 4 this afternoon. By the time you read this you may already know the fate of former Dartmouth defensive end Niko Lalos '20 with the New York Giants.
#
Todd French of Dartmouth's Facilities Operations & Management (FO&M) is a Dartmouth football fan, a fan of the Mobile Virtual Player and a bit of a tinkerer. Already the holder of a patent for a pouch enabling skiers to conveniently carry their pass, trail maps and more, he came up with an idea to add functionality to the MVP several years ago. After two years of development and prototypes, the "tackling belt" made its first appearance at a practice yesterday.
Strapped onto the MVP with a Velcro girdle of sorts, it is a red football-shaped protrusion designed to give defenders a target to aim for on the robotic dummy to practice creating turnovers. While it's still in development, French is already working on sleeves for easily attaching the "noodle" arms Dartmouth sometimes employs that allow the MVPs to harass quarterbacks, and he's even been working on a net that can be attached to the dummy to give quarterbacks a robotic receiver to throw to.
#
The Dartmouth football team has no practice today but check in on BGA Premium tonight for what should be an entertaining look at how they used their free time.
#
Per Twitter this morning: "New Hampshire QB Max Brosmer is out for the season with a torn ACL." Dartmouth visits UNH on October 16.
#
CBS Sports is among the outlets jumping on the "high school" football team that appeared on ESPN Sunday after playing a game Friday. Its story is headlined, Bishop Sycamore's legitimacy in question after football team's 58-0 loss to IMG Academy. (LINK)
FootballScoop continued its investigation with a story that includes this (LINK):

After publishing Sunday's article, multiple sources confirmed to me that players aged 20 and older commonly play for Sycamore.

"A high school coach came up to me at one of our camps and said, 'Hey, that corner over there used to be on my 7-on-7 team," one Power 5 recruiting staffer told me. "He had to stop playing because his ID said he was 21 years old."

Sycamore's representatives claimed its 2021 roster was remade with "25-26" Division I prospects.

Clearly, that was not true, as only around 30 players dressed out for Sunday's game.

EXTRA POINT
An electrician who we used during the renovation of our Etna house will be here shortly to help wire us up so we can power our new EV up with a Level 2 charger. He's coming a long way and we'll obviously be paying for his "windshield" time.

But here's the deal. That's OK. He does very good work, he's dependable and we trust him.

We could have brought in a more local electrician who did work for us when we first moved here to our Vermont hillside home. But after making numerous phone calls, leaving several messages and sending multiple emails without hearing back even once, he blew his chance. The fellow who is coming here answered my very first email the same day.

This will cost us more we're fine with that. It's not just about the work you do. It's also about service.