Other Dartmouth rankings since the start of formal Ivy League play in 1956:

The local Valley News has a piece on yesterday's Dartmouth scrimmage HERE.

Jake Novak has his annual look at the Columbia football team on his Roar Lions blog HERE. Jake caps his preview with his Ivy League prediction, which looks like this:

Green Alert Take: It's shocking to see Penn picked last and Harvard sixth. Given the heavy toll graduation took on Dartmouth, being chosen third by Jake as well as in the Ivy League media poll speaks to the respect the Big Green has earned over the past decade or so.

Speaking of Columbia, it will require proof of vaccination and the wearing of masks even at outdoor events. (LINK)

And a final Columbia note. It's not a media guide per se, but the school has produced a fine football record book HERE.

Elsewhere, 247 Sports has an interesting story about first-year coach Kevin Kelley spun out of Presbyterian College’s 84-43 victory over St. Andrews. Kelley, you may recall, is the former high school coach who doesn't believe in punting and does believe in onsides kicks. From the story (LINK):

Kelley’s numbers-based coaching style is based on one simple philosophy: increasing possessions increases the opportunity for victory.

“Let’s say it’s an eight-possession game,” Kelley said. “Your team scores 50% of the time, they score 33%. I’m gonna score four TDs, you’re gonna score three. But random fumbles happen, a penalty brings back a touchdown. Now we have a tie game. Expand it to a 16-possession game. I score eight touchdowns, you score six. Now that random turnover doesn’t matter as much and I have some cushion.

As for last week's game:

Presbyterian attempted 11 onside kicks and recovered one (the opening kickoff) against St. Andrews. They were 4 of 5 on fourth-down conversions and attempted six 2-point plays (three conversions).

Finally, the 247 Sports story revisits something I had not previously seen:

He told The Athletic in the spring he would be willing to take over Kansas’ football program with a salary of only $90,000 per win. He still believes he could win at least five games at Kansas this fall.

“I hate to say it, but I absolutely do (believe it). Yeah,” Kelley said. “I believe in the things I believe in. You can be more efficient, you can spend your time in other areas. Offensive play calling, play design and teaching — those three together — are the great equalizer.”

Green Alert Take: It is going to be fascinating to see how Kelly's system translates to college football, particularly when Presbyterian plays something other than an NAIA school like St. Andrews.

EXTRA POINT
What a difference a year makes!

One year ago this week, Mrs. BGA and I were in Colorado visiting That Certain Dartmouth '14 and we awoke to about eight inches of snow on the trusty '84 VW Westfalia camper we had driven west. TCD '14 gave us a tour of Western Colorado University, where she was finishing off her Master in Environmental Management degree while continuing to work as an educational ranger for the National Park Service. When we happened past the Mountaineer Bowl, home of the school's football team and the highest-altitude football stadium in the country, I snapped this picture. The sign on the press box proudly notes it is 7,771 feet above sea level. 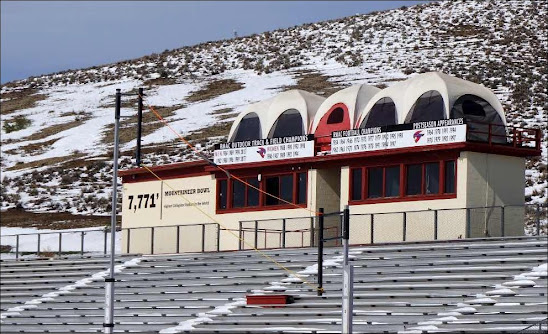 With a wink at the folks in Denver, maybe they ought to rename the place, "(Almost) Mile-And-A-Half High Stadium."
Posted by BGA at 9:26 AM