Have you flipped the page on your calendar?

Seriously, did anyone really think you could bring a bunch of football players on their day off to a pond, put them in canoes to race and not expect 1) some canoes to tip over and 2) players who tipped over to immediately look for another canoe to tip over?
A day of relaxation away from the practice field saw Dartmouth players enjoy Hanover's Storrs Pond for swimming and water sports, beach volleyball, wiffle ball and more at the popular recreation area not far from campus. 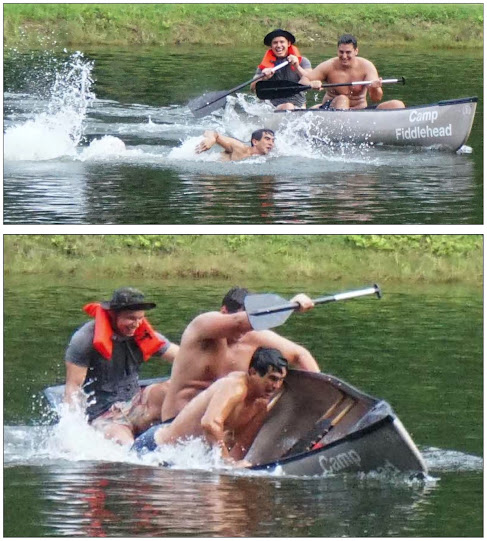 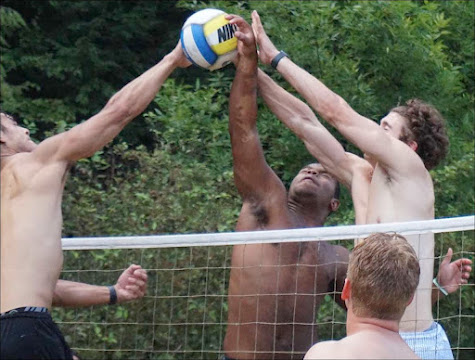 Check out last night's BGA Premium for a slide show of photos from the day's fun.
#
The Giants.com website has a detailed look at players who were cut yesterday and among other things the writeup on former Dartmouth defensive end Niko Lalos '20 included this (LINK):

Lalos was the first Giants player to intercept a pass in his pro debut since Sept. 13, 2015, when middle linebacker Uani Unga picked off a Tony Romo pass. The following week in Seattle, Lalos recorded his first two NFL tackles and recovered a fumbled snap. He was the first Giants player with at least one interception and one opponent fumble recovery in first two NFL games since Otto Schnellbacher in 1950.

Big Blue View projects Lalos will be signed to the practice squad. (LINK)

The Yale Daily news spins a story out of the Ivy League media day poll that includes this about another ballyhooed recruiting class (LINK):

. . . 24 new Bulldogs will be joining Team 148. Highlighting that group are several 3-star-rated players: tight end Luke Foster ’25, offensive tackle Andrew Weisz ’25 and defensive tackle Ikenna Ugbaja ’25. Ugbaja was a top-30 ranked defensive tackle in the country coming out of high school. Wide receiver Jay Brunelle ’24, another 3-star recruit, transferred from Notre Dame this past year and is set to make his Yale debut.

For those of us eager to see the Ivy League return to action it may be time to get nervous: Georgetown's opener against Marist has been canceled because of "preparations and conditioning that were affected by a COVID-related pause during training camp." (LINK)

Green Alert Take: This is a little harsh but the game being called off has to be doubly disappointing for Georgetown. Not only are the Hoyas missing a game but it's a game they had a good chance of winning.

From The New Hampshire, the UNH school newspaper (LINK):

University of New Hampshire (UNH) head coach Sean McDonnell announced Monday morning that his star sophomore quarterback Max Brosmer has suffered a torn ACL and will not play a snap this season. This news coming just three days before the team is set the kickoff from Stony Brook. … Brosmer came to UNH with a knee injury out of high school and McDonnell explained that his quarterback was the fastest and strongest he’s been since getting to Durham spring of 2019.

Sophomore Bret Edwards has now been named the starter for week one at Stony Brook. Edwards beat out Brosmer for the job ahead of week one in 2019 at Holy Cross. Brosmer took over for his counterpart at halftime of that game and didn’t relent the job until now.

And now, as they say, updates on a few stories we've been following . . .

(Ewers, you will remember, is the young man who passed up his senior season of high school football in Texas to matriculate at tOSU. Oh, and that's not his only million dollar deal. And one more thing. He's not the starting quarterback for the team from Ohio.)

• Yahoo has a story headlined, Everything we know about Bishop Sycamore, the 'high school' that apparently scammed ESPN into airing a football game. Check it out HERE.

EXTRA POINT
Remember that scene in Home Alone where Kevin spreads marbles to trip up the bad guys? I thought about that early this morning when I shot this picture with my iPod. This was actually on a steep enough slope that the acorns would have been rolling down the hill if not for the pine needles. 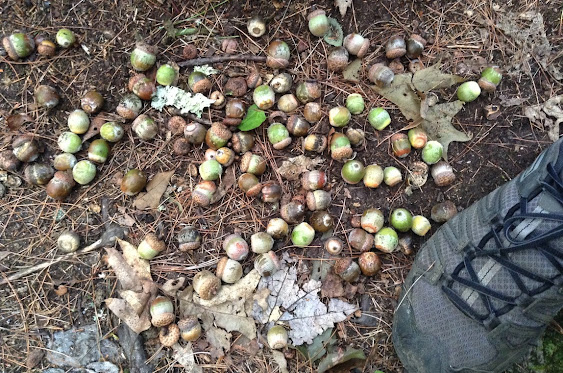 Most of the trail I hike every day is pine forest, but where there are oaks there are acorns, and there are a lot of them, this year a sign that football season is kicking off.
Another sign? Each year when we lived on Moose Mountain there were a few trees whose leaves would start to turn in mid-August. I would tease Mrs. BGA about it and she would always refer to them as "poor, sick trees," as a way of convincing herself that summer was not coming to an end.
Not far from our new house here in Vermont there's a tree I've been watching as I drive by on my way to practice that seems to be changing color by the day. In fact it is changing by the day. When I pointed it out to Mrs. BGA she didn't bother with the "poor, sick tree" line. There's no getting around it. It is September. Canoes on the pond notwithstanding, summer is fini.
Posted by BGA at 9:24 AM