First, gold medals to those of you who emailed in that the dummy who typed up the future Dartmouth schedules yesterday left a Penn game out. That dummy? It would be me ;-)

Green Alert Take: Don't ever worry about emailing corrections this way. With my eyes the only ones looking at this stuff before posting it's helpful to crowd-source editing. One of the beauties of the Internet is I can go back in and fix mistakes, something I couldn't do when I was sports editor of a daily newspaper in Pennsylvania and had that 48-point headline about Fernando Venezuela taunting me for days. 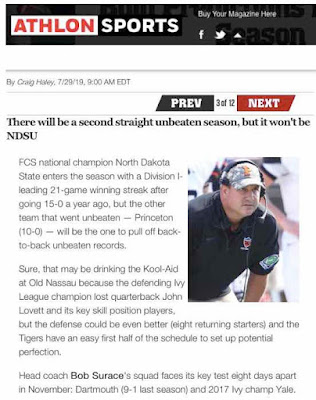 Say this for Craig Haley writing this time in Athlon: He's not afraid to go out on a limb. In a story headlined, 10 Bold Predictions for 2019 Season he certainly does make a bold one, writing (and the italics are mine):


FCS national champion North Dakota State enters the season with a Division I-leading 21-game winning streak after going 15-0 a year ago, but the other team that went unbeaten — Princeton (10-0) — will be the one to pull off back-to-back unbeaten records.

Sure, that may be drinking the Kool-Aid at Old Nassau because the defending Ivy League champion lost quarterback John Lovett and its key skill position players, but the defense could be even better (eight returning starters) and the Tigers have an easy first half of the schedule to set up potential perfection.

That prediction is on one of those über annoying sites that make you click through from page to page to see the information teased out front. If you want to share the specific page with the Princeton prediction you can find it HERE.

Green Alert Take: Uh, do you think that page is going to be blown up and posted on a few bulletin boards?

Of the quarterback Dartmouth will face in its opener the PFL website writes: 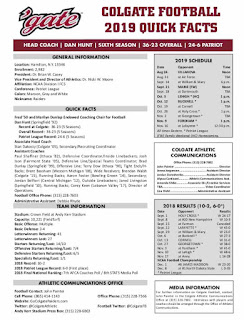 There was a time not that long ago when every school put out a "prospectus" with very general information on its football team.

At the FCS level that day may largely have passed but not at Colgate, the team Dartmouth will face in its home opener. Here's some very basic but useful information from the Colgate "quick facts:"