After a year away I signed up for ESPN+ yesterday after taking the last year off. The price went up but what hasn't?

Speaking of prices, with the start of the college football season yesterday and Dartmouth's first game 20 days away I thought to remind you that if you feel the need to buy tickets in advance, do it through the school's ticket office. Let me show you why.

Pasted below is a screen grab from one of the reseller sites. It's hard to read but it's offering tickets to Dartmouth's home opener against Sacred Heart and the Big Green's Ivy League opener at Penn. In red letters under the Tickets link it reads Limited seats available! It may be true that this seller's tickets are limited, but you can carve this into granite: There will be plenty of tickets available for both of those games.

This screen grab shows you what the ticket reseller is asking for ducats to see Sacred Heart: 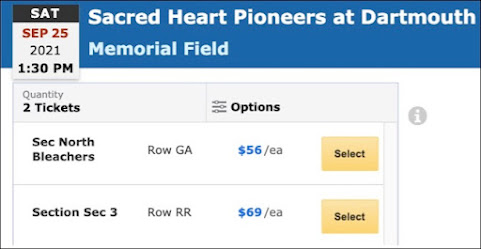 And here's what Dartmouth's ticket office is charging: 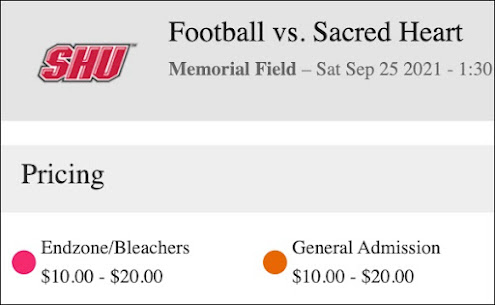 Here's what the resellers are asking at Penn: 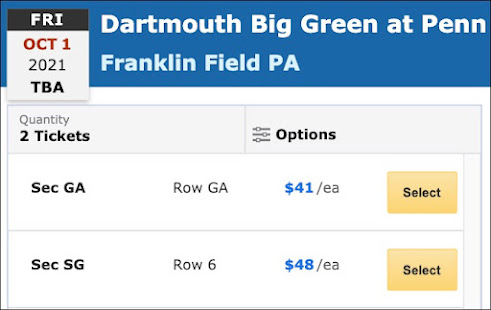 And here's what the Penn ticket office is charging: 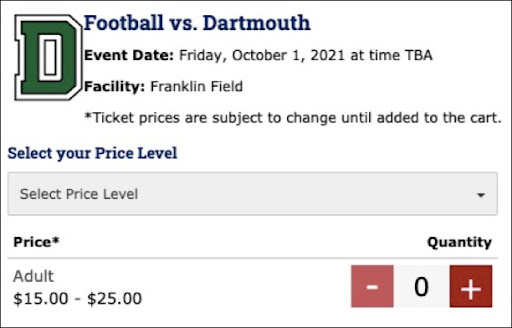 Green Alert Take: I understand people have to make a living. That picture of Griff the Wonder Dog up there in the top right of this page is a reminder of that. But those ticket prices for Dartmouth games are nuts.
Look, I expect to be using a reseller to buy tickets for the Penn State-Indiana game the day after Dartmouth is at Penn. I'll be annoyed paying a premium but I get it. Those tickets are hard to come by. Tickets to Ivy League football games are not. Save yourself a few dollars and use the Dartmouth ticket office (LINK) or the Penn ticket office (LINK).
#
If you visited BGA Premium last night or you are stopping by today you can read my story about new Dartmouth long snapper Josh Greene. He recently did an interview with NFL commissioner Roger Goodell for his Riding the Pine talk show that you can listen to on Spotify HERE. Oh, and be sure to check out the news report from several years ago featuring Greene talking about his Off the Bench Foundation's "Return and Re-Gift It" campaign, which provided sporting goods to underprivileged kids. (LINK)
#
Former Dartmouth defensive lineman TJ Simpson did not get on the field yesterday in Indiana State’s 26-21 win over Eastern Illinois. The Sycamores will return to action Sept. 11 when they visit Northwestern in a game to be broadcast on the Big 10 Network.
#
The Analyst, which provides the most professional coverage of FCS football you will find, has an overview of the season ahead that offers predictions of interest to Dartmouth and Ivy League fans HERE. Among the conference predictions is:

The story has James Madison ruling the CAA and New Hampshire, but does have UNH earning an at-large playoff spot. Central Connecticut, not Sacred Heart, is the pick to win the Northeast and San Diego is projected to regain the Pioneer Football League title over Valparaiso and the rest.
Craig Haley of The Analyst has Sacred Heart tailback  Julius Chestnut winning the Walter Payton Award, essentially the Heisman of the FCS, writing:

Coming from a Northeast Conference that’s never boasted the FCS offensive player of the year, Chestnut will need one big performance after another. It’s conceivable considering the consensus All-American has been over 100 rushing yards in nine straight games and 17 of his last 21.

Dartmouth and defensive coordinator Don Dobes will get their shot at Chestnut on Sept. 15.

EXTRA POINT
Several weeks ago I slid the standing desk here at the BGA World Headquarters down to the sitting level so I could occasionally kick back and relax.

With deadlines now looming, I'm working each morning pretty much from the time I finish BGA Daily – which is work, come to think of it – until I head out to practice in the early afternoon. When I arrive back home in early evening I'm back at the keyboard until a quick break for dinner with Mrs. BGA. Then I'm in front of the computer again.

Yesterday my back decided it had had enough and up went the desk to standing level. Dartmouth's first game may be three weeks away but the preseason has officially started . . . for all of us.