5Dimes, long referred to in this electronic precinct as the "Offshore Wise Guys," has changed its business model and no longer posts weekly odds on FCS football games (LINK). So when I went off in search of picks for this week's games featuring future Dartmouth opponents I came up empty. But that search led me to old friend Massey. Here's how the service sees the Big Green season going (LINK): 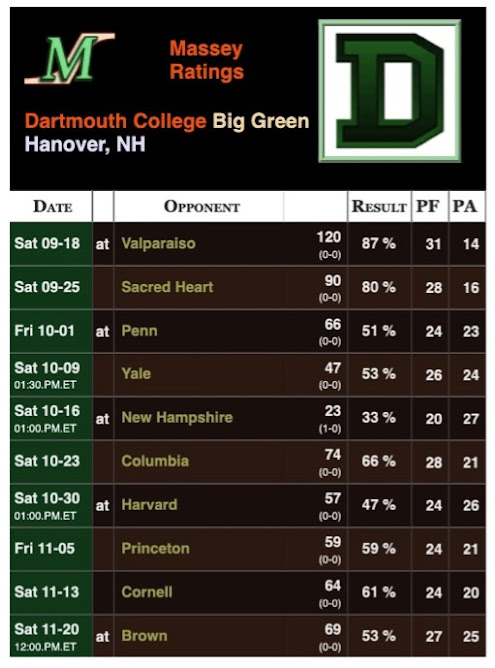 Green Alert Take: Uh, you have to wonder about a projection that gives Dartmouth a 59 percent chance of beating Princeton but just a 53 percent chance of beating Brown. I don't care where the games are being played or what happened last year, something's rotten in Denmark.
Clicking through the various Ivy League team pages I worked up . . .
Massey's Projected Ivy League standings:
Dartmouth 6-1
Yale 5-1-1*
Harvard 5-2
Cornell 3-4
Penn 3-4
Princeton 2-4-1
Columbia 2-5
Brown 1-6
* There are no ties anymore, of course, but Massey's algorithm sees Yale-Princeton ending at 27-27, so work with me here ;-)
Massey's Overall Standings:
Dartmouth 8-2
Yale 7-2-1
Harvard 7-3
Columbia 5-5
Cornell 5-5
Penn 5-5
Princeton 4-5-1
Brown  3-7

Week 5 Dartmouth opponent New Hampshire opened up last night with a 27-21 win at CAA rival Stony Brook. The Wildcats jumped out to a 27-0 lead in the third quarter only to need a fourth-down stop at its own 19 in the final minute to escape with the win.

Quarterback Bret Edwards, pressed into action when an ACL tear ended the starter's season just a few days earlier, had a big night, completing 17-of-25 throws for 233 yards and three touchdowns without an interception. (LINK)

Week One Dartmouth opponent Valparaiso opens up with a visit to Indiana Wesleyan tomorrow. Before you hammer the Beacons for scheduling a game like that, keep in mind a week later they travel to North Dakota State.

Ever since the spring season ended I've been keeping an eye on the headlines and the transfer portal to see if Chestnut might be moving on. It apparently wasn't an outlandish idea. From the story:

Chestnut would have drawn attention from high-profile FBS programs in the NCAA transfer portal, a sexy draw for many standout FCS players.

“Everybody thinks about it,” Chestnut said. “But I was like, why would I leave a place where people love me and care about me? If I left, would I get the same love that I get here? I don’t think so. The coaches care about me — and I care about them, as well. I’ve made a lot of good friends here, met a lot of good people, and there are a lot of connections I can make in the outside world from here. So I was like, no — no way I can do that.”

Many players with comparable success — in all sports — are sucked into the transfer portal, eyeing advanced prestige and exposure.

“It’s always a fear,” said (Sacred Heart coach Mark) Nofri, whose team has finished atop the NEC four times in his nine seasons. “We told him, the offense is running through you. And our offensive coordinator, Matt Gardner, put it this way: If you’re at a blackjack table and it’s hot, why are you going to get up and leave when you’re making money? Why go to another table? You stay right here and play your hot hand.”

With Dartmouth nickels coach Kyle Cavanaugh leaving the coaching staff for a private sector opportunity, Ahmaad Smith is moving up and the program has an opening. The official Dartmouth job posting for Football Quality Control Specialist - Defense is informative. From the posting (LINK):

• Familiarity with current play by play databases and analytics

EXTRA POINT
Following up on yesterday's PAT about the "infomercials" on the Sirius ESPNU radio program, I was listening again yesterday during my drive to practice and sure enough, at 1:50 on came an infomercial. When I pulled into the parking lot just before 2 p.m., the commercial was just wrapping up.

Needless to say, I had the car radio on mute shortly after hearing the introduction and I glanced occasionally at the description of the commercial on the "infotainment" screen to see if it was still going. It was. (Infotainment? What a ridiculous word, but that's what they call it.)

As it turned out the commercial was a full 10 minutes long and every bit as distasteful as the one the day before. What was it for? Navage, a nose cleaner. I'm not making that up.

People pay good money to have Sirius radio in their cars and they get that dropped on them? Not me. When the free trial is over, my Sirius days are over. Sirius-ly.