As reported last night on BGA Premium, the Big Green introduced two players at the end of yesterday's practice.

With limits on the number of players allowed in camp, Remington Gall, a 6-foot-4, 185-pound wide receiver who is still recovering from a basketball injury and not yet able to play, could only report when the regular student body returns to campus. He's been on the roster and you met him previously HERE.

A newer name to the program is Jackson Namian, a 6-2, 185-pound freshman from St. Albans School in Washington, D.C. An all-conference defensive back, he also played wide receiver in high school.

Both Gall and Namian will work at wide receiver for the Big Green. 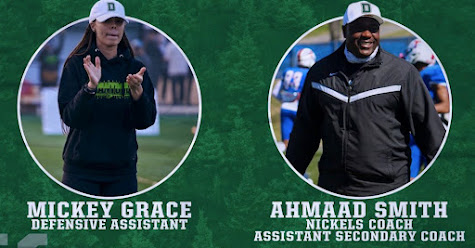 Speaking of new names, the Dartmouth sports information office has put out a release introducing the two newest members of the coaching staff HERE. Ahmaad Smith steps in for Kyle Cavanaugh, who has accepted a job in the private sector, while Mickey Grace follows in the steps of Callie Brownson and Jennifer King, two of women who worked previously for the Big Green and now are in the NFL.

First St. Thomas had its initial game as an FCS member canceled because of COVID-19. Then it was Georgetown having its game against Marist canceled. Now it is the Robert Morris program being "on a pause" because of COVID and having its season opener at Dayton canceled.

Central Connecticut, one of the preseason favorites in the Northeast Conference along with Sept. 25 Dartmouth opponent Sacred Heart, dropped a 28-21 decision last night to Division II Southern Connecticut. That's not a good look for the NEC, whose teams continue to show up on Ivy League schedules.

It's getting a little out of control. First a Texas high school quarterback leaves before his final season to enroll at Ohio State and cash in on NIL. The nation's top-rated QB, he already has signed a $1.4 million autograph contract (LINK). Now it's happening again, although this time it is the No. 11 quarterback in the country, he's leaving during his final high school season, and he's enrolling at Rutgers. The reports indicate he's getting a six-figure deal. Read the story HERE.

Dartmouth will hold its first intrasquad scrimmage of the camp this morning on Memorial Field. Check in with BGA Premium tonight for a look at how it went.

EXTRA POINT
The flag on our garage has been replaced for the fall: 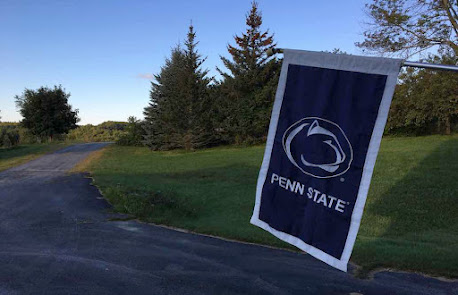 For those of you who may be new to this electronic precinct, the back story is that Mrs. BGA's father, That Certain Nittany Lion '16, and I all earned Penn State degrees despite none of us growing up in the Keystone State. (With one of our children holding a Dartmouth degree and one holding a Penn State degree – and with both duly employed – it's the best of both worlds ;-)
Posted by BGA at 9:00 AM