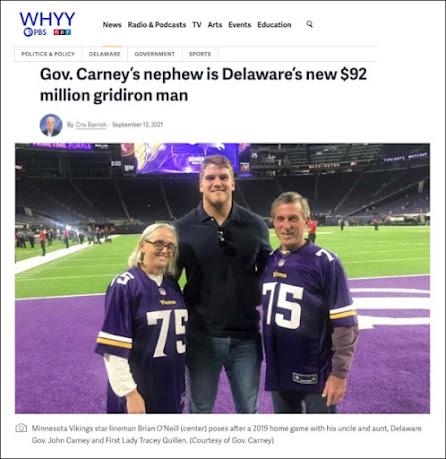 Dartmouth football coaches knew about Brian O'Neill early on, and while they had a couple of pretty good "ins," some things are not meant to be. O'Neill, a former Pitt offensive tackle who just inked a $92 million contract with the Minnesota Vikings, poses in this picture with his Aunt Tracey and Uncle John Carney '78, the governor of Delaware and a former All-Ivy League defensive back at Dartmouth. O'Neill's father Brendan '72, was a Dartmouth running back who ran for 449 yards and three touchdowns and caught 15 passes for 146 yards for the legendary 1970 Dartmouth team. Read the full story that mentions the Dartmouth careers of both O'Neill's father and uncle HERE.
#
After losing to NAIA Indiana Wesleyan in its opener, Week 1 Dartmouth opponent Valparaiso (0-2) figured to be in big trouble traveling to 16-time national champion North Dakota State. The home team ran out to a 43-0 halftime lead and then called off the No. 4 Bison on the way to a 64-0 rout.
How complete was the romp? North Dakota State ran for 458 yards. Reigning Pioneer Football League offensive player of the year Robert Washington, meanwhile, carried 15 times against the Bison defense for a total of nine yards. North Dakota State had nine offensive possessions, scored on eight of them and tossed in a punt return for a touchdown for good measure.
#
With All-America tailback Julius Chestnut out with a knee issue, Week 2 Dartmouth opponent Sacred Heart (1-1) dropped a 17-6 decision at Bryant. The Pioneers managed just 227 yards of total offense and 112 yards rushing one week after Chestnut picked up 170 by himself against Bucknell.
#
New Hampshire (2-0), Dartmouth's final nonconference opponent, gave coach Sean McDonnell his 100th career victory with a 26-14 win over Towson. Quarterback Bret Edwards, moved into the starting role because of injury only days before the season began, had another solid outing. He went 24-of-32 for 261 yards and two touchdowns.
#
In another game of interest to longtime Dartmouth football followers, one week after beating FBS member Connecticut old friend Holy Cross was drubbed by FCS relative newcomer Merrimack, 35-24. The Warriors (had to look that one up) are in just their third year as a DI program.
The Holy Cross loss was one more blow to the reeling Patriot League, whose football teams continue to struggle. Bucknell, which was shut out a week ago by Sacred Heart, fell behind Villanova yesterday at the half by a 45-0 score before losing 55-3. Lehigh dropped a 31-3 decision to Richmond and now has been outscored 78-6 in two losses. Lafayette dropped a 24-3 decision to William & Mary and Colgate  lost to Stony Brook, 24-3. All those four teams could muster was one field goal apiece as they were outscored, 134-12.
Elsewhere, Fordham fell to a good Monmouth team, 26-23, and Georgetown scored the only Patriot League win with a 20-14 overtime victory at Delaware State.
#
EXTRA POINT
When it was clear where That Certain Dartmouth '14 was going to college I asked one thing of her and that was to look up and acknowledge with a wave drivers who stop to let her cross the roads around the Dartmouth Green. I was reminded of that the past couple of days with students flooding back to campus and town buzzing. When Dartmouth is in session you have to be super attentive driving past the Hanover Inn and Hopkins Center as students with their eyes glued to their phones step off the curb and head across West Wheelock Street, way too often paying absolutely no attention to traffic.
One thing I asked of That Certain Nittany Lion '16 when it was clear where he was going to college was that he understand that crossing roads on the Penn State campus was not going to be like it was around Dartmouth. While the traffic is nowhere near what it is on the Hanover Inn corner, stepping off the curb without looking on the Penn State campus is not a good idea. 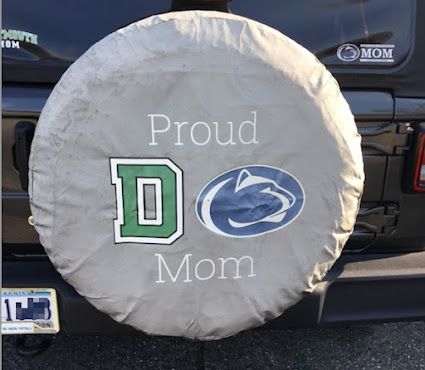 Spotted this before Dartmouth's practice yesterday and no, that's not our car. The car belongs to defensive lineman Alex Schmidt's mom.
Posted by BGA at 9:30 AM