It is in serious need of a table of contents, and a first glance at the "Longest Winning Streaks Vs. One School" reveals there is still some updating to be done, but the Ivy League Football Record Book is apparently coming back to life after not being updated for several years. Check it out HERE.

To be sure, people have long referred to Dartmouth as being "up in the woods," but the real branding of Dartmouth as The Woods traces directly back to a push by Big Green coach Buddy Teevens to give Memorial Field an identity. Here's part of what I wrote in 2013 when Teevens was debating nicknames for the Dartmouth facility. He was test-driving various nicknames and to that end BGA Daily ran a poll to see what nickname you preferred. The entry began with this introduction:

College football stadiums have some colorful nicknames. At Georgia they play "Between the Hedges." Clemson's home is "Death Valley." Ohio State has "The Horseshoe" and Michigan "The Big House." Florida plays in "The Swamp." Tennessee at "Rocky Top." Boise State plays on the "Smurf Turf."

If you could pick a nickname for Dartmouth's Memorial Field, what would you choose?

Could you see the Big Green rocking opponents in "The Quarry," an homage to the Granite of New Hampshire and the quarries across the river in Vermont?

How about cutting an opponent down to size in "The Woods," with the a sound of a chainsaw coming over the PA on third downs?

Or perhaps making Memorial Field, "The End of the Road," for Ivy League foes?

The Woods won out and it is becoming ubiquitous enough that even Dartmouth Admissions is using it, although not as effectively as the football program did in this video:

NJ.com has a story headlined, Ranking 16 Giants practice squad players by which is most likely to contribute to the big team in 2021. Dartmouth alum Niko Lalos was ranked sixth of the 16. From the story (LINK):

He was called up a couple times last year before eventually being signed onto the active roster. He forced two turnovers, including a crucial interception against the Bengals. He can help on special teams both in coverage units and, if needed in a pinch, as a long snapper. He’s a favorite of the coaching staff too.

Did you realize there were six FCS wins over FBS teams last week? Here they are:

If you plan on attending Dartmouth's Ivy League opener at Penn in a few weeks, these guidelines must be met (LINK):

All fans that meet the age eligibility for the COVID-19 vaccine — 12 years and up — must indicate that they have been immunized against the virus. Fans will also be required to wear face coverings at athletics events, regardless of vaccination status. Fans that do not meet the minimum age for receiving the vaccine will also be required to wear a mask, unless under age five.

The concessions policy has also been updated, as only individually wrapped containers will be for sale. Since full-scale concessions will not be available, fans may also bring their own food and beverages to the events, so long as they remain socially distant while they remove their mask to eat.

The Cornell Sun had a story Friday under the headline, (Cornell President Martha) Pollack: Campus Shutdown Is A Possibility If Cases Keep Rising. From the story (LINK):

As the more than 300 cases on campus approach the total number of positive cases recorded at Cornell in all of 2020, President Martha Pollack emailed the Cornell community Thursday, outlining possible courses for the fall semester.

If cases fall enough, campus could return to green, the email read. But if positive COVID cases rise to a point that Cornell can’t maintain safe campus operations and support isolation, additional restrictions range from moving courses online to shutting down campus.

EXTRA POINT
If you've been following along, I started growing "Cascading Petunias" in our old Aerogarden hydroponic garden on Nov. 1 last year. By mid-winter they looked like this: 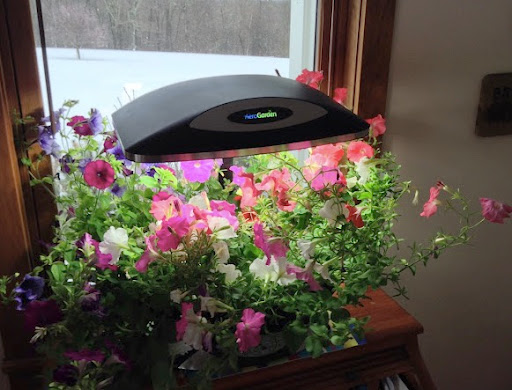 When spring rolled around they were starting to fade and on a whim we transplanted them to a couple of hanging baskets and moved them outside. There they thrived and were growing and flowering like crazy . . . until the middle of last week. After just a couple of nights when the temperature got down to 50 or so they were done. Here's what they looked like this morning: 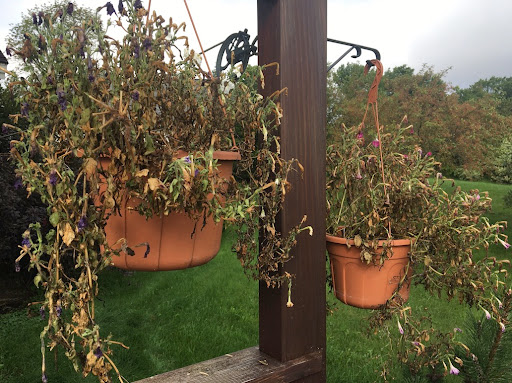