After delaying the process until the entire team had the opportunity to be together for a couple of weeks Dartmouth has elected and announced captains for the 2021 Big Green. The captains are: 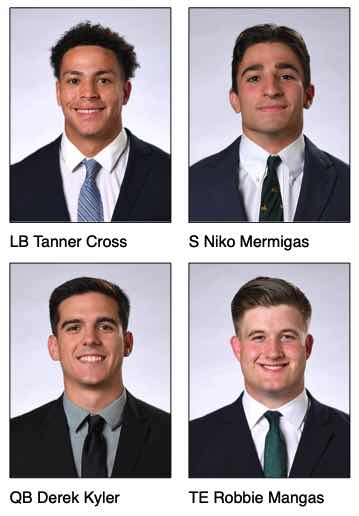 Check in with BGA Premium today to learn more, and for the second part of a three-part series looking at this year's freshman class with head coach Buddy Teevens.
#

The Dartmouth's Freshman Issue has a well-done story headlined Varsity sports set to resume with possible campus restrictions; Teams will rely on senior players to guide programs after over a year away from campus that includes this (LINK):

Football outside linebacker Zack Milko ’23 expressed his excitement to get back to the locker room, which the football team has not had regular access to this summer.

“It’ll also be great to have in-person meetings again after watching film by screen share for the past fifteen months,” Milko said. “But the biggest thing has to be putting pads back on and seeing every single one of my teammates again. I couldn’t be more excited.”

“We’re going to be playing so many guys who have never seen the field before, but are now upperclassmen,” Milko said. “It’ll almost be like having two freshman classes because this will be the sophomores’ first season as well.”

Milko expressed his hope that the football team’s collective relative inexperience will be mitigated by the return of fifth year players — who have an extra year of Ivy League eligibility — because “there are a lot of leaders among them.”

EXTRA POINT
The two most familiar weather sayings around here are:

"There are nine months of winter and three months of damn poor sledding."

"If you don't like the weather now, just wait a few minutes."

The second came into play on my way to practice yesterday afternoon when I almost pulled off the road to wait out a horrendous downpour. As I crossed the Ledyard Bridge into Hanover at 1:45 I was driving through so much water I half thought the bridge had been overrun by the Connecticut River. The standing water was that deep.

When I got to Memorial Field I had my umbrella out for only a minute or two before whatever leftover rain stopped falling. By the mid-point of practice there were scary looking clouds in one direction and Carolina blue skies in another.

As I drove home there wasn't a cloud in the sky but within 15 minutes or so there was a gully washer that made the afternoon drenching look like a sprinkle. Yup, Mark Twain nailed it.